Driving While Medicated: Know the Risks

Prescription medication is a normal part of life for millions of Americans.  All medications or drugs have a physiological effect.  This means that a medication or drug is a substance that effects the functioning of our body.  Most people take medications because their physicians have diagnosed an issue which may be improved by taking the medication.  Having been directed to take such medication by their doctor and having taken it as directed, many people can be surprised by a DUI investigation relating to their prescription medications.

Such an investigation can come about in a number of ways.  Traffic stops, roadblocks, and wrecks are the three major events that can bring you in contact with an officer trying to determine if you are under the influence.

Most officers have very limited training in medical conditions and medications, and the effects of medical conditions and medications on driving.  A few have completed the old Drugs That Impair Driving Course or the new Advanced Roadside Impaired Driving Evaluations (ARIDE).  A tiny few have completed the intensive Drug Recognition Expert course.  None of these programs bring the officers training up to that of a nurse, doctor, pharmacist or pharmacologist.

Such training does identify certain medications and classes of drugs as suspect.  If you take medicine for pain relief or management, sleep disorders, mental health 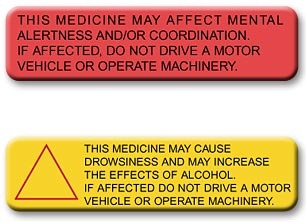 issues, anxiety and a few others, you probably take a medication that the officer has been trained to suspect would cause you to be impaired.  Some, but not all, of these prescriptions,may bear warning labels.  Even where medicines bear such labels, this does not mean that the medicine cannot be in your system when you are driving.  Although some officers may insist to you that this is the case.  In reality, the effect of various medications can vary from one person to another, and the effects can certainly vary over time, often having less effect after prolonged use.  Similarly, what might seem like a high dose for one person may be a low dose for a different patient.  Unfortunately, DUI investigations are often one size fits all.

Most officers have only their standardized field sobriety evaluations to use to evaluate impairment.  While such tests have been "validated" for detecting the presence of blood alcohol greater than 0.08, they have not been validated for detection of impaired driving, impairment, or the presence of medications or drugs. This will not prevent officers and prosecutors from arguing to judges and juries that the evaluations show impairment, just as they currently do regarding alcohol.

The question then becomes whether a driver should participate in exercises which have no validity and which will be used to argue wrongly show impairment from medication.  The answer is never.  Not only are these "tests" not reliable for the purpose that they will be asserted to have, many times the underlying medical condition for which the medication is being taken may cause the person difficulty in successfully accomplishing the evaluations.  Almost any skeletal system problem or vestibular problem may account for the inability to maintain balance or to walk heel to toe.  Officers have no way of accounting for physical problems in scoring a driver's performance on a field sobriety evaluation.

The second tool in the officer's tool chest is asking the person what medications they are taking.  If the driver admits consuming almost any medication, the officer is likely to assume that will cause the person to be impaired.  This is especially true of pain medications, mental health medications, methadone, and sleep aids.  The driver's best choice is to decline to answer any questions about this very personal and private aspect of their life.  A driver can certainly choose not to disclose whether they are taking any prescription medications and, if so, what they are.

Finally, some officers will attempt to find some pretext to search the interior of the person's car.  If they find a prescription bottle or if they find pills in some container other than the prescription bottle in which they were dispensed, the officer will see this as the explanation for the manifestations of impairment that the officer claims to exist.  It  is a criminal offense in Georgia to possess certain medications in a container other than the bottle in which they were dispensed.  Although the person to whom the medicine is dispensed is authorized to carry them in some other container, they would need to have a copy of the prescription with them to prove their authorization to have the medication.  For these reasons, it is not advisable to carry pills in the passenger compartment of your vehicle.

Because officers have few tools to ascertain the extent of impairment from medication, it is inadvisable for a driver to engage an officer on this issue.  The best advice for a driver who takes prescription medication is:  don't talk about medication, don't take any roadside tests, and don't consent to a search of your vehicle.   In short, just say no.  The driver may still be arrested, but he or she has made it much harder  for the officer to prove the case against the driver.

Sean A. Black is a 1992 graduate of the Emory University School of Law. He has been in private practice in Toccoa, Georgia since June 1, 1992.

If you have been arrested for DUI or other serious driving offenses and would like to consult with Black Law Offices, LLC, about your case, please fill out and submit this form.

Thank you for contacting us. We will get back to you shortly.

Please complete all required fields below.

Proud Member of the National College of DUI Defense

This site is an advertisement for Black Law Offices, LLC. All information is provided for educational purposes and should not be relied upon as legal advice. A person facing a serious criminal charge such as DUI or Vehicular Homicide should seek legal advice based upon the facts of their own case.